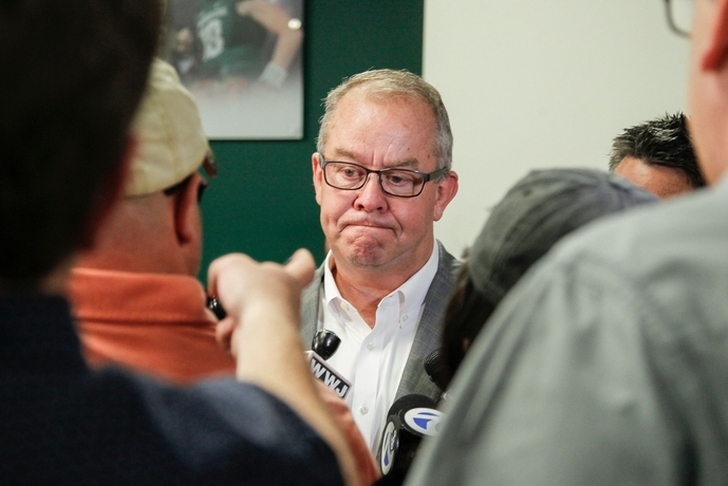 Michigan State athletic director Mark Hollis has announced his retirement in a press conference on Friday as a result of the Larry Nassar scandal.

Nassar, who was employed by Michigan State and served as the national medical coordinator for USA Gymnastics from 1996 to 2014, was sentenced to 40-175 years in prison after more than 150 women accused Nassar of sexually abusing them.

However, Outside the Lines reports that the school first received a complaint against Nassar in 2014 and didn't notify federal officials, and they still have not handed over all documents related to the allegations against Nassar.

Michigan State University, under U.S. Department of Education oversight since 2014 because of its mishandling of sexual assault and gender discrimination cases, asked federal officials last fall to end their monitoring of the university because administrators had been acting in "good faith" and had "gone above and beyond" in meeting standards laid out by federal officials, according to documents obtained by Outside the Lines.

Federal investigators visited the campus and reviewed documents in 2014. That year, a recent MSU graduate reported that Nassar had assaulted her under the guise of medical treatment. MSU campus police and Title IX investigations began. Federal investigators were not told of the allegations at the time, according to the correspondence obtained by Outside the Lines. Nassar was cleared in both investigations.

In the press conference, Hollis claimed that he never met Nassar and did not know about the allegations against him until the Indianapolis Star article about them in 2016. He also said he was not pressured to retire.

On Tuesday, the NCAA announced that they sent a letter of inquiry to Michigan State about potential rules violations that may have occurred surrounding Nassar.

“As a first measure, we request that Michigan State send information to the NCAA in a timely manner, to the attention of Vice President Jon Duncan, regarding any potential violations of NCAA legislation as a self-report as outlined above. This is your member obligation under NCAA constitution Article 2.8.1 and Bylaw 19.2.2, the NCAA wrote in a letter to Michigan State.

“This request is made with the understanding that there may be ongoing criminal or governmental investigations that take priority. Nonetheless, we expect to receive an expeditious response to the above requests.”

Hollis released the following statement on Wednesday about the NCAA's investigation into the school.

“Since my first day on the job as athletic director, my focus has always been on the student-athlete. They are at the core of our athletic department mission statement. Our first priority has always been and will always be their health and safety. In regards to the letter we received from the NCAA last night, the athletic compliance and university general counsel offices are preparing a comprehensive response. Michigan State University will cooperate with any investigation.”

He said he plans to cooperate fully with both investigations during retirement.

School president Lou Anna Simon resigned on Thursday as a result of the investigation.