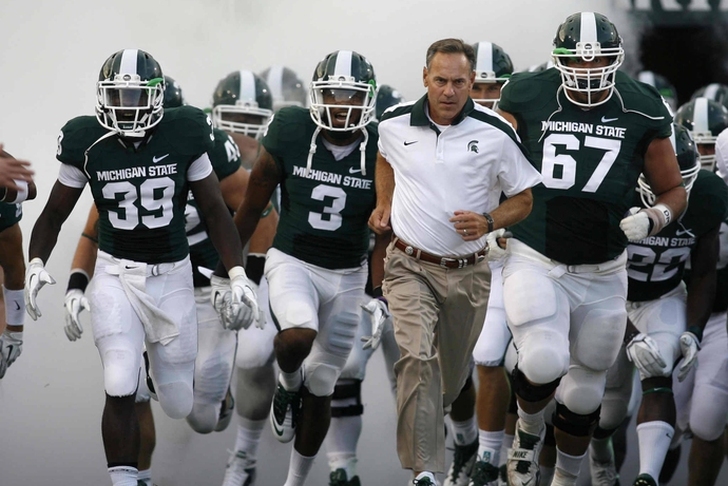 The Michigan State Spartans pulled away late in a 52-26 win over the Indiana Hoosiers on Saturday, doing a convincing enough job to vault from #8 to #6 in Sunday's AP Poll reveal. We're more than convinced that MSU belong among the elite in the polls. We're buying them as a legit College Football Playoff threat. Here's three reasons why.

Dantonio is the most underrated coach in the country as he never quite gets the credit he deserves for keeping Michigan State among the best teams in the nation year in and year out. The Spartans have won ten or more games in four of the past five seasons, but this is arguably the most talented team he's ever had in East Lansing. Their resume isn't exactly impressive aside from the miracle win over Michigan, but they can hang with any team they face regardless thanks to the wealth of talent Dantonio has assembled in recruiting and nurtured.

DE Shilique Calhoun, LB Ed Davis, and FS R.J. Williamson headline a unit that is consistently among the most dangerous in the nation, and that isn't any different in 2015. They've bent a fair amount in the past few weeks, but all that matters is that they've come up big in most clutch situations. They've got enough horses on D to slow down Ohio State's high-powered offense in their battle that will likely determing the Big Ten East. If anyone can slow the Buckeyes down, it's Michigan State.

Cook is one of the top NFL prospects currently going in the college game, and he's continuously upping and evolving his game as the weeks go on. He showed flashes of that greatness for the Spartans in 2014, but he's legitimately GREAT now as the focal point of the offense. Cook has thrown for 2,070 yards with 15 touchdowns against just two interceptions. People want to knock MSU for their schedule and the way they've won games, but 95% of the championship teams in the past few decades would kill for a QB as efficient and refined as Cook.