The 3 Most Likely Bowl Destinations For The Michigan State Spartans 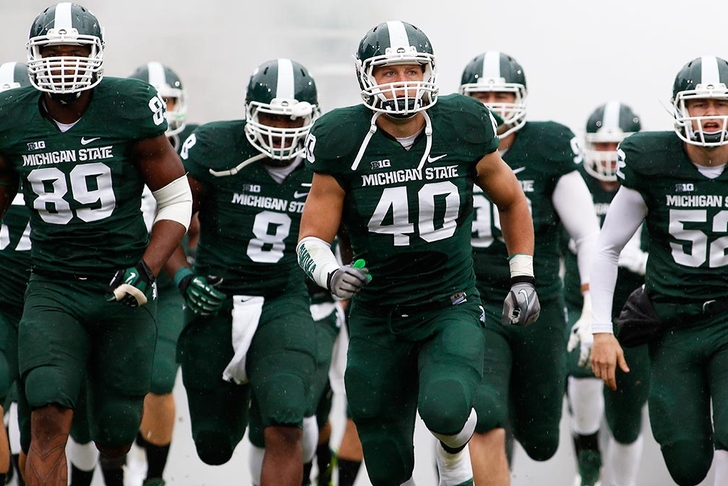 Michigan State's playoff chances might have faded, but the Spartans can still end the 2014 season in a top-tier bowl.

The Orange Bowl is a strong possibility if Ohio State makes the playoff, and could be in the cards even if they don't. While Miami is a bit of a hike from East Lansing, there are much, much worse places to travel in late December...and the Orange might be MSU's best bet from a matchup standpoint. Georgia Tech is looking like the probable opponent here, and Pat Narduzzi's defense should be pretty excited about getting a shot at the one-dimensional Yellow Jackets.

Chick-fil-A Peach Bowl (At Large vs. At Large)

The Peach Bowl becomes a serious possibility if Ohio State misses out on the playoff, and with TCU's dominant win on Saturday...well, it looks like the Buckeyes will be missing out even with a win over Wisconsin, which would send them to the Orange Bowl. That leaves MSU with the best of the rest...which, in their case, means the Peach Bowl. Mississippi State and Baylor are both strong possibilities here, but Arizona is also in play.

Goodyear Cotton Bowl (At Large vs. At Large)

This is another option that becomes available if OSU misses the playoff, and it might be Michigan State's best-case scenario overall. A New Year's Day Bowl that gets plenty of attention thanks to its prominence and location, many projections see the Cotton Bowl hosting Kansas State, Baylor, or Ole Miss.

Where would you want to see the Spartans go bowling? Let us know in the Comments!