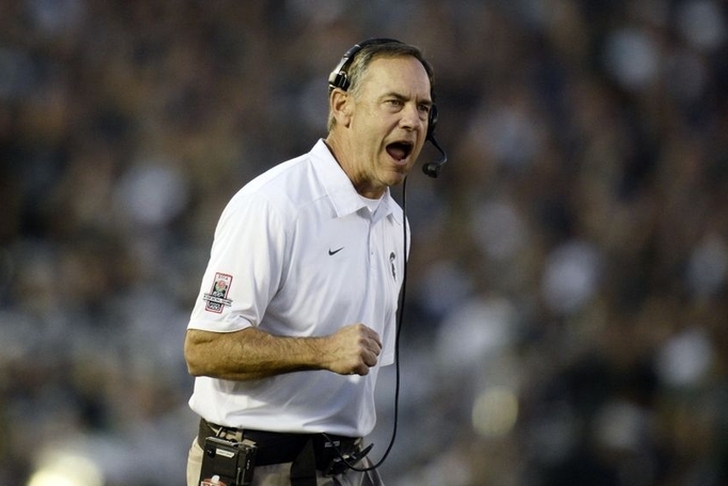 The deck was stacked against the #9 Michigan State Spartans with starting QB Connor Cook out of Saturday's road game against the undefeated #3 Ohio State Buckeyes.

In a drive that'll be etched in the history of the teams' storied rivalry, a 41-yard field goal by Spartans kicker Michael Geiger finished off Ohio State and rekindled the Spartans' College Football Playoff chances by sealing a gutsy 17-14 win.

Junior Spartans QB Tyler O'Connor, starting in Connor Cook's place, wasn't called upon much as a traditional passer. He threw just 12 times for 89 yards and a touchdown. He functioned as part of a dual-threat QB situation with sophomore Damion Terry, who went just 1 of 4 for 2 yards through the air. However, they carried the ball a combined 16 times for 50 yards and helped move the Michigan State offense just enough to complement RBs LJ Scott and Gerald Holmes (27 combined carries, 123 yards, 1 TD) and a fierce defensive performance.

On the other side, Buckeyes HC Urban Meyer chose not to extend the Spartans secondary vertically -- a game-planning decision which will come under fire over the next few days. Meyer stayed conservative, dialing up just 16 passes for QB JT Barrett for just 46 total yards. The Buckeyes ran the ball 29 times for 86 yards and a score.

All together, Ohio State was outgained 294-132 on offense, looking overmatched against the Spartans' dominant front seven all day long.

With the win, Michigan State moves to 10-1 (6-1 conf) and is just a win over Penn State next week away from winning the Big Ten East and moving on to the conference title game. Ohio State falls to 10-1 (6-1 conf) in advance of next week's season finale against Michigan.