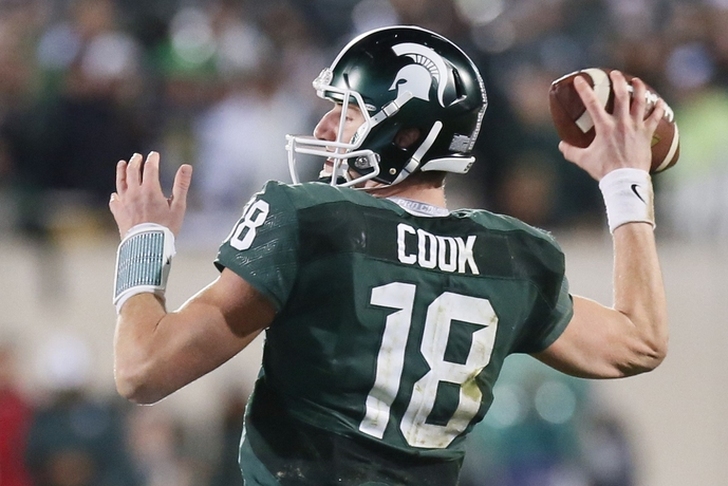 The #5 Michigan State Spartans and #4 Iowa Hawkeyes will do battle Saturday night for the Big Ten Championship, but there's something bigger on the line when the teams lock horns in Indianapolis. Saturday's game is a winner-takes-all showdown for a College Football Playoff spot. Barring some committee wackiness, this is a play-in game for college football's new Final Four. Who's got the edge? Check out our preview and prediction below.

As we said before, this one's for all the marbles. The loser will be headed to a consolation New Year's Six bowl game. The winner moves on to a national semifinal game -- two steps away from the ultimate goal of a national championship.

What They Are Saying About The Michigan State Spartans:

Hawkeyes and Spartans reflect on FanFest

What They Are Saying About The Iowa Hawkeyes:

Hawkeyes heading to Indianapolis: what to do

Winning in the trenches

Iowa's going to stack the box against Michigan State, forcing Connor Cook to beat them through the air. That's a big gamble, considering Cook's accuracy as a passer and ability to sustain drives with proper reads and recognition. If Cook can get first downs early and often agaisnt Iowa, the Hawkeyes will be forced to sit back and out of their defensive comfort zone. We all knew Cook was going to be a major factor in this game. However, he's pretty much the THE X-factor here. If he goes, so will the Spartans.

Those who are writing off Iowa due to a questionable schedule are going to be really surprised by the 60 minutes in Indy on Saturday. Iowa is a complete team with an underrated offense led by QB CJ Beathard and RBs Jordan Canzeri and Akrum Wadley, along with a defense full of playmakers. Michigan State has been inconsistent all year long, and we're predicting a similar outing to the one they had against Michigan this year -- only this time they won't be saved by a game-capping miracle.