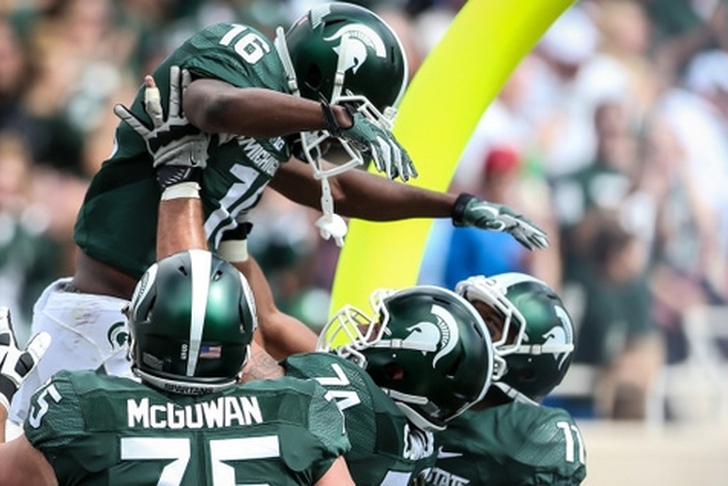 The Michigan State Spartans are the No. 2 ranked team in the country behind rival Ohio State. However, the Buckeyes have struggled throughout much of their first four games, while the Spartans have dominated better competition. Here are four reasons why Michigan State has shown that they're the best team in the country and should have the No. 1 spot:

Michigan State has consistently boasted one of the country's best offensive lines over the past decade, opening up huge running lanes and keep their quarterback upright. However, this year's unit might be the best yet, led by Jack Conklin, Jr., and Jack Allen. They haven't allow a defense to disrupt the flow of the offense, which has let Michigan State's playmakers take over the game and be successful.

Dantonio is the most underrated coach in the country as he never quite gets the credit he deserves for keeping Michigan State among the best teams in the nation year in and year out. The Spartans have won 10 or more games in four of the past five seasons, but this is arguably the most talented team he's ever had in East Lansing. They've already beaten one top-10 team (Oregon) this year - expect even more big things from him and Michigan State as the season progresses.

DE Shilique Calhoun, LB Ed Davis, and FS R.J. Williamson headline a unit that is consistently among the best in the nation, and that hasn't any different in 2015. They're giving up less than three touchdowns per game, and most of the yardage/points they've given up have come in garbage time with the game already in hand. That defense will be the biggest key for them against Ohio State's high-powered offense in their battle that will likely determine who wins the Big Ten. If anyone can slow the Buckeyes down, Michigan State will.

Cook is widely considered one of the top NFL prospects in the college game, and he's moving from being a really good quarterback to a great one. He showed flashes of that greatness for the Spartans in 2014, but he's doing it on a more consistent basis as the focal point of the offense. Cook has 838 yards passing yards on the year with nine touchdowns to just one interception, and that efficiency has played a huge factor for Michigan State's offense this year.