3 Reasons Why Michigan State Will Win The College Football Playoff 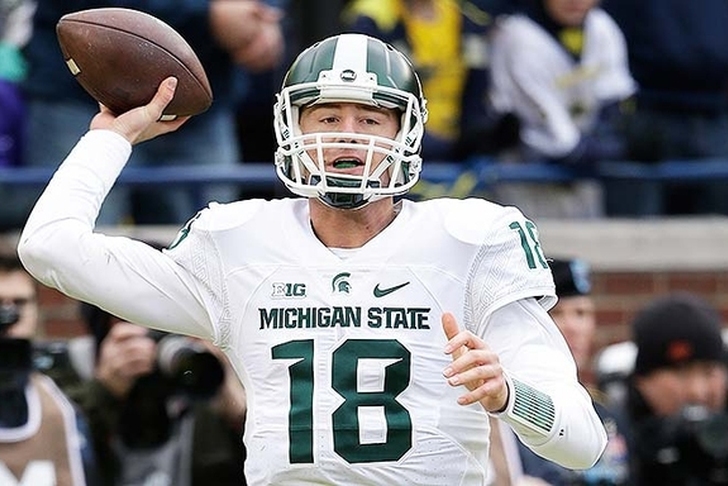 The Michigan State Spartans are just two wins away from the ultimate prize, and they're still not getting the respect they deserve as national championship contenders. Rated by most CFB experts as the least likely team to win the College Football Playoff, there's plenty on the Spartans' side to indicate that they can prove the naysayers misguided. Here's 3 Reasons Why Michigan State Will Win The College Football Playoff

The three other coaches in the College Football Playoff (Nick Saban, Dabo Swinney, Bob Stoops) will take up the majority of the national headline space over the next few weeks, but there is no better in-game magician in the CFP than Mark Dantonio. Not only is he an elite game-planner prior to games, he's got an acute eye for the way games are trending -- switching up his previous plans on the fly to exploit weaknesses.

If there's any coach that can beat Nick Saban in a battle of gridiron chess, it's Dantonio. Same goes for Stoops and Swinney.

The winningest quarterback in Michigan State history, Cook simply gets the job done. No one in the nation, not Clemson's Deshaun Watson or anyone else, has the track record of buckling down late and making every throw asked of him like Cook has. Alabama's will look to take the legs of the MSU running game out early in the Cotton Bowl, but that's only going to brighten the spotlight on one of the best passers in the game.

Cook can beat Alabama. If he gets over that hurdle, a game against Clemson or Oklahoma will be the equivalent of a cakewalk.

No one gave the Spartans a chance to take down the Ohio State Buckeyes in Columbus with star QB Connor Cook sidelined due to injury. All they ended up doing was completely stifing Alabama's, forcing the Buckeyes to play their game in a monumental 17-14 win. The Spartans also had their share of naysayers during their rivalry game at Michigan, but they were able to pull that out in magic trick fashion? Iowa? The then-undefeated Hawkeyes couldn't close late against a resilient Spartans side in Indy.

Bettors have pushed the current spread to nearly double digits in favor of Alabama in New Year's Eve's national semifinal, but that's just fine for MSU. They've been proving their critics wrong all season long.