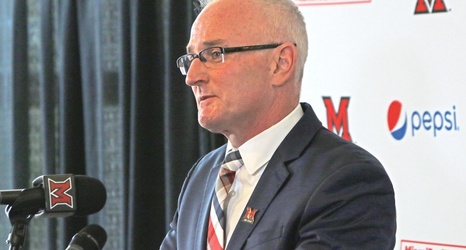 The Club Lounge of the Goggin Ice Center buzzed as Cincinnati television stations set up their cameras on a stage in the back of the room, and alumni, press and Miami staff filed into several rows of seats while current Miami hockey players crammed against the right wall.

The temperature rose as people chatted to fill the time before 1:30 p.m. yesterday afternoon, when Chris Bergeron was to be introduced as Miami hockey’s sixth head coach in program history.

After opening remarks from Athletic Director David Sayler and an introduction from former Miami head coach Bill Davidge, Bergeron stepped behind the podium and to the helm of Miami ice hockey.