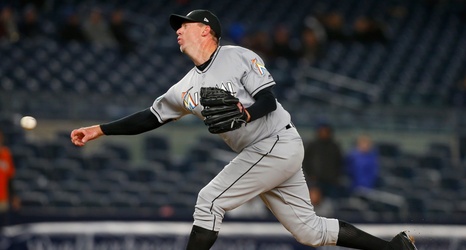 SAN DIEGO (CBSMiami/AP) — The San Diego Padres were probably happy to see the struggling Miami Marlins come to town for a four-game series.

It started out well, with consecutive wins for the home team.

San Diego manager Andy Green probably didn’t expect to win on Wednesday quite like they did though.

“I never envisioned winning with someone tripping over the guy at first base,” Green said. “But it got the job done.”

Pinch-hitter Hunter Renfroe’s infield single in the ninth inning led to two runs when third baseman Miguel Rojas followed with a throwing error, lifting the Padres to a 3-2 victory over the Miami Marlins on Wednesday night.