Student of the Game Video Review Series: Miami vs. UNC 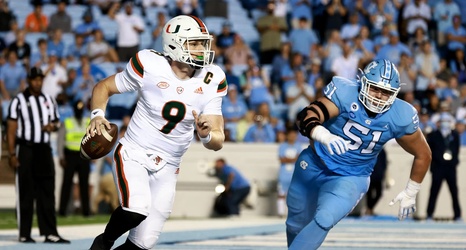 Manny Diaz was the last person to leave Kenan Memorial Stadium. He looked stunned. He looked defeated. In consecutive weeks, the Hurricanes lost in heart breaking fashion and the end of the Diaz era inched increasingly closer and closer on Saturday night.

The Miami Hurricanes have now lost six in a row to FBS schools and despite how heroic the late game antics were, Miami once again came out frigidly cold. After the first quarter the Hurricanes were outgained 176-12.

I personally don't think that game was fireable. But 2-4 on this season, 0-6 vs your last p5 opponents, leading the nation in missed tackles, losses to FIU, Louisiana Tech, your record off bye weeks and giving up 778 last year makes a pretty strong argument against that.