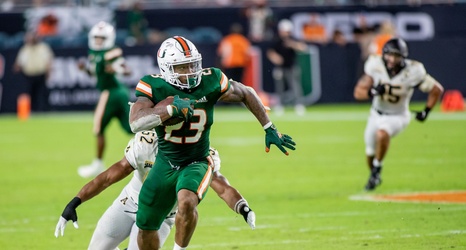 Starting running back Cam’Ron Harris is out for the rest of the season after sustaining a right knee injury during Miami’s 45-42 loss to the University of North Carolina Tar Heels on Oct. 16. Harris was helped off the field in the third quarter and did not return to play.

“We’ll miss Cam for the rest of the year,” head coach Manny Diaz said on Monday. “Cam had been one of the guys who had really stepped up as a leader, had been named captain in the two weeks since the Virginia game, and it’s just another tough blow to the team.