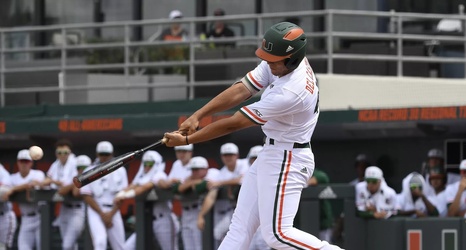 The Miami Hurricanes are twenty games above .500 at 34-14 (14-10 ACC) after a Sunday win against the Bethune-Cookman Wildcats. The ‘Canes managed to win all three games despite multiple fielding miscues, including four today that allowed BCU to score two of its runs.

The Wildcats started out the game by taking advantage of two fielding errors from Miami to score a run and gain an early lead. However, much like the previous two games, the ‘Canes immediately responded to take the lead in the bottom of the first. Jordan Lala led off the inning with a double, and Anthony Vilar followed with a double of his own to tie the game.