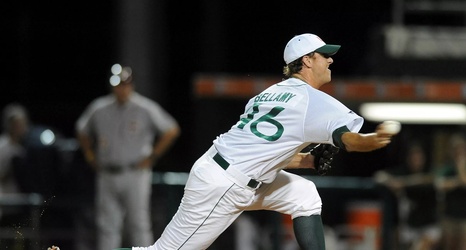 The college baseball season is fast approaching. The Miami Hurricanes annual Alumni Game is Saturday, February 8th at Alex Rodriguez Park at Mark Light Field. Miami’s first real game is a weekend series at home against Rutgers on Valentine’s Day weekend. Miami is in the top 5 of many of the college baseball pre-season polls under second year head coach Gino DiMare. DiMare played for the ‘Canes from 1989-1992 under “The Wizard” Ron Fraser, and served as a long-time assistant to Jim Morris from 1997-2008 and 2012-2018 before getting the nod in 2019.

The Miami Hurricanes baseball team has dabbled with a drop down or “submarine” style pitcher since the first time I walked into Mark Light in the early 1980’s.