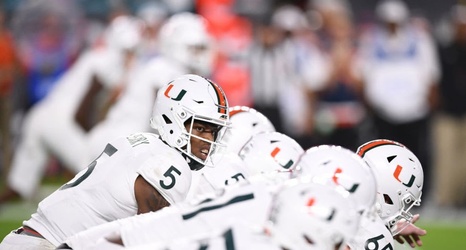 MIAMI, FLORIDA - OCTOBER 11: N'Kosi Perry #5 of the Miami Hurricanes in action against the in the first half at Hard Rock Stadium on October 11, 2019 in Miami, Florida. (Photo by Mark Brown/Getty Images)

The Miami football program lost only four transfers following the 2020 season. Defensive lineman/linebacker Patrick Joyner, quarterbacks Tate Martell and N’Kosi Perry and running back Robert Burns are the only players who departed the Hurricanes after the 2020 season. Only Joyner has a new destination.

The culture changes that head coach Manny Diaz demanded after when he became head coach have slowed the exodus of unhappy players.