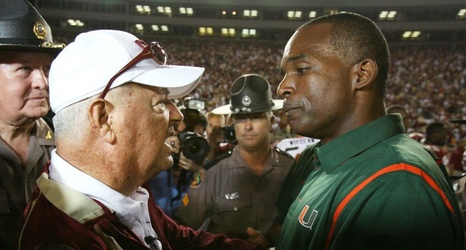 The Florida State versus Miami football games from the 1980s through the early 2000s decided multiple national championships and help build a Hurricanes dynasty. The arrival of Bobby Bowden in Tallahassee in 1976 was the beginning of an incredible run for the Florida State, Miami and Florida football programs.

Three years after Bowden arrived in the Sunshine State capital Howard Schnellenberger took over in Coral Gables. Bowden led Florida State to berths in the 1980 and 1981 Orange Bowls. Bowden died on Sunday at 91 only a few months after being diagnosed with pancreatic cancer.