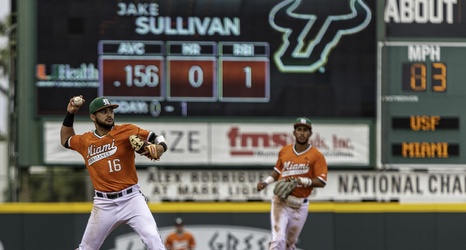 While there are many familiar faces returning to the lineup this season, an entire new pitching rotation is in place, with two freshmen slated to be starting pitchers for the Miami Hurricanes. Catcher Adrian Del Castillo and first baseman Alex Toral will Miami offensively, while Tony Jenkins will be the defensive anchor in the outfield. Before the Hurricanes take on the No. 1 Florida Gators in the first series of the season, here is a breakdown of Miami’s projected starting lineup:

Toral batted .293 with an Atlantic Coast Conference-leading 24 home runs in 2019, while logging a .