“I just had to step up.” Mike Harley answers the call at receiver with career day 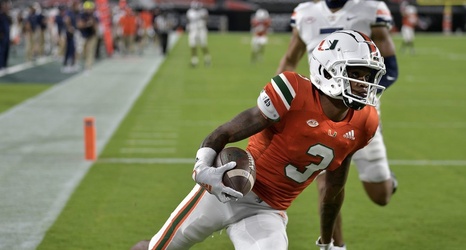 Miami coaches sent a group text to receivers earlier this week and told them that the starting job at wide receiver was up for grabs. All nine-receivers listed on the depth chart appeared to be in an open competition for the starting job. The players were told whoever has the best week of practice will get the starting job.

Mike Harley, a senior, took that straight to heart and responded.

Harley helped propel Miami to its 19-14 win over Virginia with a career high 10 catches for 170 yards and a 43-yard touchdown.

“Someone just had to get out of their comfort zone because it’s too comfortable, so coach made it a challenge and me being the oldest guy, a senior, I just had to step up and I just had to stay consistent,” Harley said after the win Saturday night.