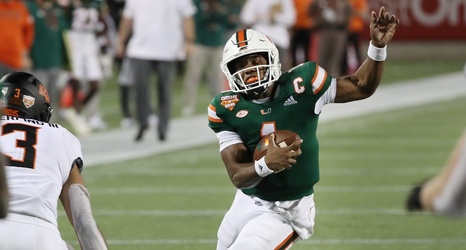 After giving up 21 points in the first quarter, it seemed as though nothing was going the Hurricanes way. And then even worse, Miami quarterback D’Eriq King went down with a right knee injury and was ruled out for the remainder of the game.

The Hurricanes managed to rally back behind backup quarterback N’Kosi Perry, but the valiant effort fell short and the Hurricanes fell 37-34 in the 2020 Cheez-It Bowl at Camping World Stadium in Orlando, Florida.

Miami, now 1-10 in bowl games since 2008, ends the season with two consecutive losses. King’s status right now is uncertain and he will be evaluated once the team returns to Coral Gables.