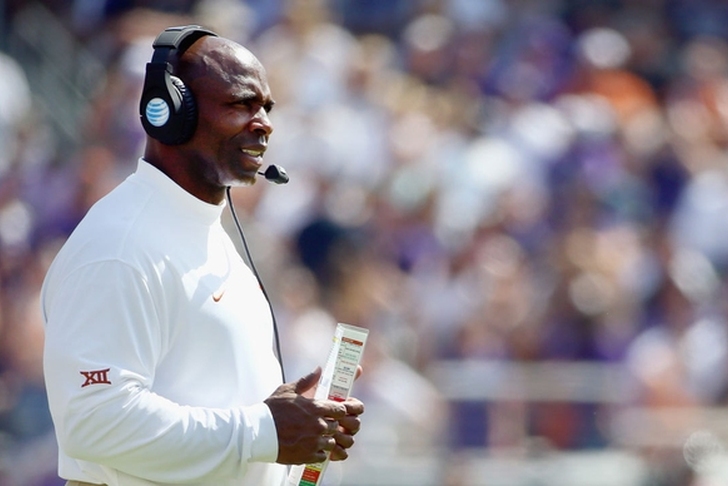 The Miami Hurricanes dropped to 3-2 on the season after narrowly losing 29-24 to Florida State on Saturday night, and while some would say that shows progress, Canes head coach Al Golden won't save it job with moral victories. The pressure has been mounting on Golden for two years now, and with each passing game, it appears more and more likely that he won't return to the team next season.

Many have specualted as to who Miami would turn to if they did fire Golden, and ESPN's Brett McMurphy has a new name to throw into the mix - Texas head coach Charlie Strong:

“I think one name that would be in the mix, and I think his stock improved dramatically Saturday, is Charlie Strong,” McMurphy said on 790 The Ticket in Miami. “I don’t think it’s any secret that it has not been a great fit at Texas for Charlie and I think with his history recruiting the South Florida area when he was at Louisville, I think Miami could make a run at him and I think Strong would be interested.”

Strong is facing intense pressure himself on the Texas hot seat as the Longhorns are just 2-4 on the season and finished 2014, Strong's first year in Austin, with a 6-7 record.

While that record may not be impressive, it's important to remember that Strong was tasked with rebuilding a disastrous situation at Texas and glad glowing success at his previous head coach stop, Louisville, where he lost just three games over his last two seasons.