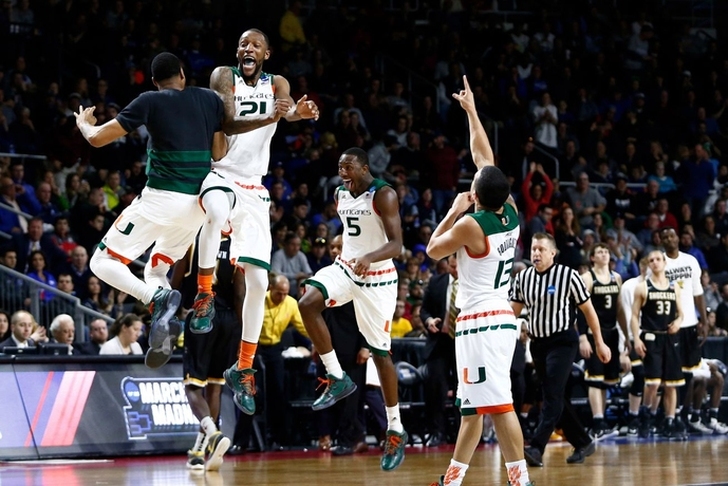 The Miami Hurricanes find themselves in the Sweet 16 for the second time in four years, and they can advance to the first Elite Eight in school history by beating Villanova on Thursday night. Here are three reasons why they'll do just that:

3) Miami has the depth & experience to match Villanova
Miami has nine players that play over 12 minutes per game, and seven of the nine average over five points per game, giving the Canes perhaps the most balanced team in the country. A large part of that is due to the experience of this group, as five of those players are seniors and only one is a freshman. That has served them well in big games all season, and will do so again against Villanova. This game is not too big for the 'Canes.

2) Villanova's lack of success against good teams
Villanova's 31-5 overall record is impressive, but their record against ranked teams isn't by any stretch of the imagination. The Wildcats are just 3-4 against ranked teams this season, losing those games by an average of nearly 12 points per game. They're also just 1-3 against top 10 teams, and Miami went into the postseason ranked No. 10 in the country.

1) Guard play
Villanova’s remarkable record in close games doesn’t mean they don’t have their struggles - their five losses have come by an average of 10 points per game. That’s because their defense can be easily exploited by teams with athletic guards that can attack the paint. Villanova’s help defense has been inconsistent all season, and none of their guards are great defenders.

Enter Miami, who has two excellent, athletic senior guards in Angel Rodriguez and Sheldon McClellan. These two combined for 46 points against Wichita State, who leads the nation in defensive efficiency - expect these two to both put forward huge efforts while leading the Hurricanes to a win.