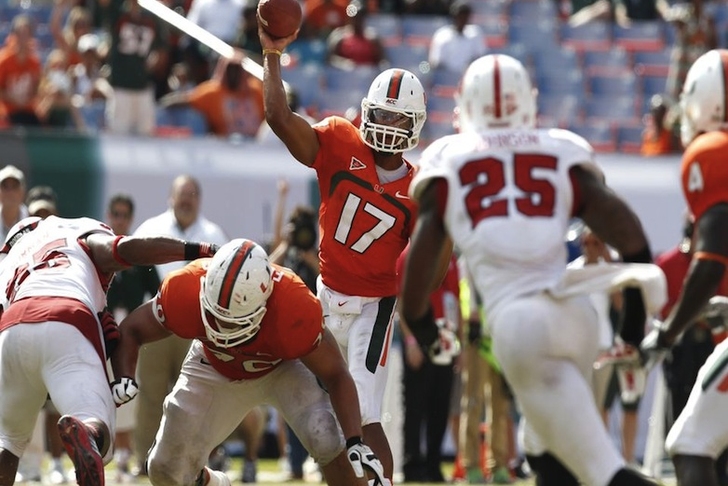 The Miami Hurricanes will face the Louisville Cardinals in Orlando in this year’s Russell Athletic Bowl. The Hurricanes finished the regular season off strong, winning their final two games after going through a rough three game losing streak, where they where outscored 131 to 68.

Louisville closed out their season with an overtime win against Cincinnati. They finished the season 11-1, with their only loss coming from Central Florida. That loss ruined Louisville’s chances of back-to-back BCS bowl game appearances.

This matchup is a preview of things to come, next season Louisville is leaving the American Athletic Conference and will join the Hurricanes in the Atlantic Coast Conference. This will also be Miami’s first bowl game since 2010 and Al Golden’s first as the head coach of the Hurricanes.

Louisville’s defense is ranked third in the nation allowing a little over 12 points a game. They are allowing 257.9 yards of total offense, which is second best in the nation. If the Hurricanes want to pull of the upset they are going to have to establish a balanced offense. The two teams that gave Louisville problems where UCF and Cincinnati and each threw for at least 250 yards and rushed for over 100 yards. Miami has to replicate what they did and not become a one-dimensional offense.

The Hurricanes are going up against a Louisville defense that has forced 26 turnovers on the season. In the Hurricane’s nine wins they are +9 in the turnover margin, but in their three losses they are -3. The Hurricanes have to avoid the mistakes that have plagued them in their losses. They cannot afford to give the high-powered Louisville offense any extra possessions.

Throw it early and often

Terry Bridgewater has yet to declare for the NFL draft, but the potential number one overall pick gets a great matchup against a struggling Miami Hurricanes defense. After holding their first five opponents to only 141 yards passing a game, Miami’s defense allowed an average of 299 yards passing their last seven games. The Hurricane’s struggle on defense plays right into the strength of Louisville’s offense. The Cardinal’s come into the game with the 18th ranked passing offense averaging 302.9 yards a game.

Louisville comes into the game tied for fifth in the nation with 39 sacks on the season. Their two starting defensive ends accounted for 22 sacks, one of them being Marcus Smith who is second in the nation with 12.5 sacks. Miami’s offensive line has only given up 13 sacks on the year, so it's not going to be easy to get pressure on Morris. Louisville needs to try and pressure Morris and capitalize on his mistakes.

The Louisville Cardinals opened up as a 3-point favorite, and have been bet up to 4.5 points.

Coming into the season Louisville had aspirations to make the National Championship or at least another BCS bowl game. With their disappointing loss to Central Florida they also lost any opportunity of reaching either. Now they have to play the Hurricanes in a lower tier bowl game, so their motivation could be questionable. Miami on the other hand, is extremely exited to finally be playing in the postseason after a two-year bowl ban. This will be a high scoring back and fourth game. Miami pulls off the upset and wins, 30-28.