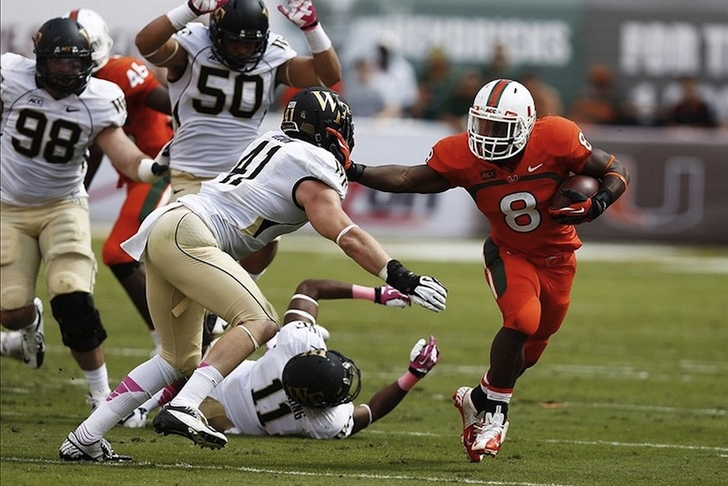 The Miami Hurricanes are ranked sixth in the nation and improved to 7-0 with their come-from-behind win against Wake Forest. For the second straight week, the Hurricanes went down early and needed a touchdown in the final minutes to pull off the victory.

Miami got away with starting slow against both North Carolina and Wake Forest, but if they do it again this weekend, things could get ugly.

Miami travels to Tallahassee to face an undefeated Florida State team ranked third in the nation. FSU has outscored their opponents 368 to 91, and have looked like one of the most dominant teams in the nation.

In Florida State’s closest game this year, they were outrushed by Boston College 200

yards to 159. If the Hurricanes are going to win this game, they’re going to have to replicate what Boston College was able to do. Miami needs to use its size advantage on the offensive line to create running lanes for both Duke Johnson and Dallas Crawford.

If Miami is going to come away with a win, they’re going to have to avoid turning the ball over. Florida State’s offense is explosive enough to give them extra possessions, and they’re averaging over 52 points a game. The game against Wake Forest was the Hurricanes’ first turnover-free game since the third game of the season on September 21st - and that was against Savannah State. If Miami is going to pull off the upset, they’re going to need to play a perfect game, and they can’t afford to turn the ball over.

Stephen Morris has thrown eight interceptions on the season, four of which came against North Carolina. If FSU can hit Morris early and rattle him, it’s going to be a long day for the Canes offense. It’s not going to be easy to get pressure on Morris though; he’s only been sacked four times this season.

The Miami Hurricanes allow 164 yards passing a game at home, but on the road it jumps to 292 yards a game. That plays right into what FSU wants to do on offense, which is to throw the ball.  FSU needs to let Jameis Winston do what he’s done the entire season -throw the ball. The Heisman candidate has averaged 311 yards passing while completing over 69% of his attempts.

The Florida State Seminoles opened up as 21-point favorites, and have been bet up to 22 points.

Florida State has beaten Miami three out of the last four years, but have only covered the line once. When these two teams meet, it’s usually a hard fought game decided in the fourth quarter. The Hurricanes will keep it close for most of the game, but FSU is going to pull away late. Florida State wins, 38-24.