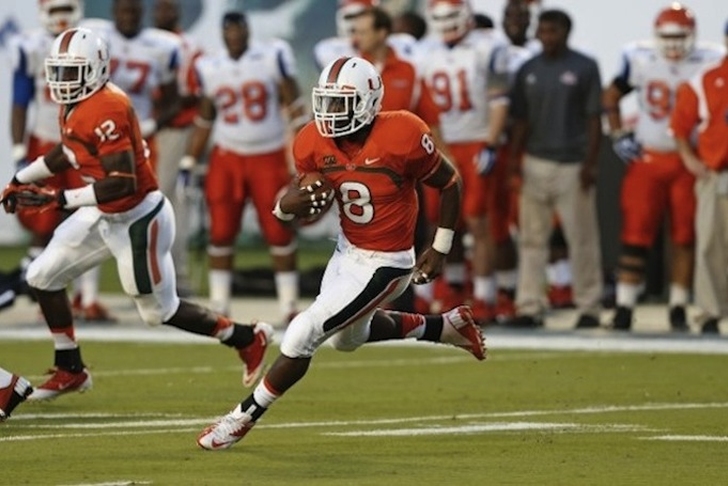 The Miami Hurricanes are 4-0 for the first time since 2004. They open up their ACC play this Saturday when the Georgia Tech Yellow Jackets visit Sun Life Stadium.

Georgia Tech (3-1) is coming off a home loss to Virginia Tech. They were held to only 10 points for the game, which was their lowest scoring output for the season. They turned the ball over three times and were never able to get their offense going. Georgia Tech is averaging over 36 points and only allowing over 12 points a game. They are coming to Miami hungry, and looking to break their streak of four straight losses to the Canes.

Miami is coming off two blowout wins against South Florida and Savannah St. in which they scored 126 points and only allowed 28 points. In both games, the starters rarely saw the field during the second half. This could pose some problems for the Hurricanes, especially on the defensive side of the ball, where they haven’t been tested so far.

Keys to the game

Get off to a Quick Start

When Georgia Tech has the ball, they have to get their offense going early. It took the Yellow Jackets offense four drives before they scored a point. They cannot afford to have a start like that against UM’s high-powered offense. Georgia Tech needs to maintain their 9-12 play drives and score touchdowns instead of field goals.

Against Virginia Tech, the Yellow Jackets opened up the game with two turnovers in their first two possessions - starting QB Vad Lee ended up throwing two interceptions and losing a fumble. In order for the Yellow Jackets to pull off a road victory, they need to take better care of the ball.

Stephen Morris has suffered an ankle injury for the second straight game. The Hurricanes had a sizeable lead in both games, so he didn’t have to finish either of them. This week against Georgia Tech, Morris needs to stay healthy and keep the offense rolling. If his ankle holds up he should have plenty of opportunities to take shots down the field.

Against Georgia Tech’s triple option, the Hurricanes defense need to stick to their gaps and play assignment football. If any defender over-pursues, it leaves a hole in the defense that Georgia Tech could capitalize on. Miami has had success containing the Yellow Jackets offense in the past, holding them to 36, 7 and 10 points over the last three years. If they can maintain that success, they should come away with a win.

The Hurricanes opened as 4-point favorites, and have been bet up to 6 points.

The Hurricanes won and covered in three out of their last four games against Georgia Tech. This year, Miami’s defense has improved dramatically, especially rushing the passer, where they already surpassed last season’s total of 13 sacks with 16 sacks so far this year. Miami is going to score early and make Georgia Tech throw the ball more than they want to, and force Vad Lee to beat them. Miami has the home-field advantage, and is going to win their fifth straight against Georgia Tech while covering the spread. Miami wins, 28-17.