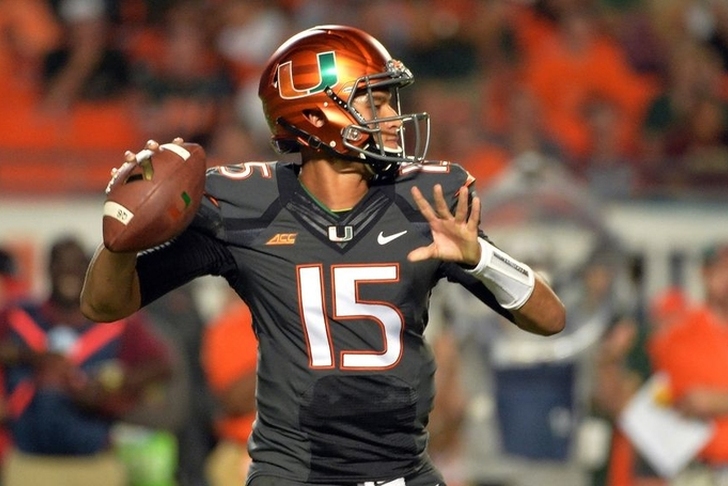 There are plenty of changes taking place inside the Miami football program this offseason, but there's still a boatload to look forward to when it comes to the 2015 season. How much you say? Here are 3 Reasons Why The Miami Hurricanes Will Win The ACC This Year.

Duke Johnson is off to the NFL, and while there's really no way to replace him per se, Miami isn't for want of quality options heading into the 2015 season. Sophomore Joseph Yearby posted 509 yards and two touchdowns in what amounted to change-of-pace duty behind Johnson last year. He's a potential breakout candidate with excellent speed around the edge. Combine his skill set with 230-pound junior power back Gus Edwards and you have the recipe for an effective running game that'll only get better as the weeks go on.

Senior safety Deon Bush (five forced fumbles) and junior corners Corn Elder and Artie Burns are all impact talents -- guys who can alter the course of a game with one jumped route or one big hit. Against the high-powered passing games of Florida State and Clemson, that strength will play a pivotal role in helping Miami both survive and shock one or both teams en route to the ACC title game.

Kaaya is the most intriguing wild card of this year's sophomore QB crop. He captured the ACC Rookie of the Year award last year and set Miami true freshman records for passing yards and touchdowns, but he'll now have to provide a follow-up without some key NFL-caliber supporting cast members (Ereck Flowers, Phillip Dorsett, Duke Johnson). He isn't a reliable deep-ball threat just yet, but his accuracy and ability to relax in the pocket in the face of pressure is that of someone beyond his years. Head coach Al Golden's job may ride on Kaaya's arm. Lucky for Golden, Kaaya has all the markings of a kid who's up for the challenge.