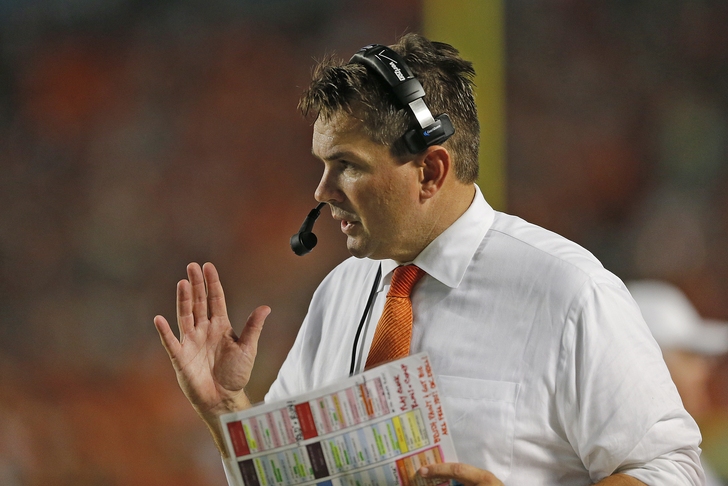 Al Golden and the Miami Hurricanes are wrapped up in an extremely complex relationship. After bringing Temple back from the dead, Golden arrived in the wake of major NCAA sanctions, but managed to navigate the choppy waters and keep the team competitive.

The reaction to Golden was generally positive, but in late 2013, things took a turn. First, the Penn State job became available - Golden, a PSU alum, wasn't very subtle about his interest in the position, and Miami's rough end to the 2013 season didn't help matters (after a 7-0 start, the Canes lost three straight and ended up getting routed by Louisville in the Russell Athletic Bowl). In 2014, Miami regressed, going 6-6 and ending the regular season with three straight losses.

Golden's position isn't immediately under threat (his contract still has five years to run, and it includes a massive buyout), but with Brady Hoke and Will Muschamp gone, his seat is one of the hottest in the nation. To keep his job, Golden needs to avoid these three scenarios:

Morale in Miami is at a low point after the Canes' unimpressive end to the season. A bowl win would ease the pressure on Golden and ensure he returns in 2015, but a bad loss could force Miami's hand. Miami boosters and administrators are well aware of the public opinion on Golden changing for the worse, and they recognize that an embarrassing loss could make his position untenable.

Miami's schedule to start the 2015 season is TBA, but a matchup with Nebraska in Week 3 gives Golden little room for error (especially if heat carries over from his 2014 finish). A 1-2 start would immediately set off alarm bells, and if the Canes somehow drop their first three, Golden will be out.

Since Golden came to Miami in 2011, the Canes are 3-8 against ranked opponents and 2-6 in rivalry games. Golden's inability to win important games has been the main complaint among fans and boosters, and a lack of improvement here could be his undoing. Even if Miami ends 2015 with a decent record - say, 8-4 - more losses to rivals and ranked competition will leave Donna Shalala and Miami's athletic department no choice but to relieve Golden of his duties.

Golden's buyout and contract length are protecting him at the moment, but patience in Miami is definitely wearing thin. Golden did well to keep Miami competitive through a difficult time for the program, but if he can't start producing consistent results at the level Miami is accustomed to (ACC titles, marquee bowl appearances), the Canes will have to look elsewhere.

Miami Coaching Hot Board: The Top 10 Replacements For Al Golden If He Gets Fired