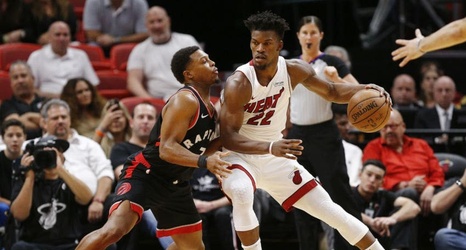 Jimmy Butler #22 of the Miami Heat drives to the basket against Kyle Lowry #7 of the Toronto Raptors. (Photo by Michael Reaves/Getty Images)

In one of their latest columns, Bleacher Report has dubbed Kyle Lowry as the “dream trade target” for the Miami Heat this offseason.

The Miami Heat are on their way to their first NBA Finals appearance since the 2013-2014 campaign, the last of the LeBron James era. But the jury’s still out on whether or not they’re capable of capturing the title now that they’re faced up with the Western Conference’s best.