Jimmy Butler Won't Play for Heat vs. Bucks Because of Back Injury 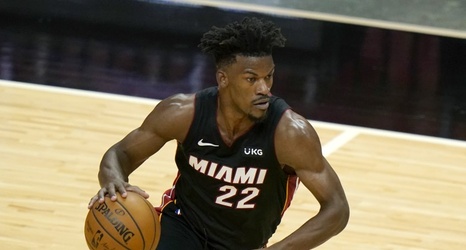 Miami Heat star Jimmy Butler will miss his team's road game against the Milwaukee Bucks on Saturday due to lower back tightness.

Per Anthony Chiang of the Miami Herald, Nemanja Bjelica will replace Butler in the starting lineup.

Butler has missed time this season with ankle and knee injuries and has not played more than 65 games since the 2016-17 campaign.

When healthy, he is the go-to leader for the defending Eastern Conference champions as someone who can stuff the stat sheet by attacking off the bounce, shooting from the outside and defending the opponent's best player on a nightly basis.