Is Miami being viewed as the NBA’s ‘Dangerous Loomers’ yet again entering 2022-23? 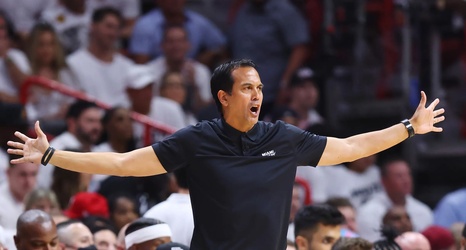 Mere months ago, the Miami Heat finished the regular season as the top team in the Eastern Conference, downed the Atlanta Hawks and the Philadelphia 76ers in the opening two postseason rounds and were advanced to its second Eastern Conference Finals in three seasons against the Boston Celtics.

The Heat took Boston to seven games, though it lost three straight home contests at FTX Arena. By the end, both teams were battered by injury — most notably Jimmy Butler (knee), Kyle Lowry (hamstring), Tyler Herro (groin), Robert Williams (knee), Jayson Tatum (shoulder) and Marcus Smart (ankle), among others — truly transforming it into a series of attrition.