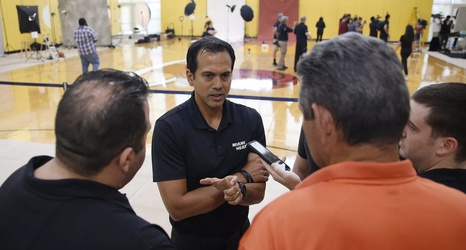 For the first time since the 2014 NBA Finals, the Miami Heat have a superstar in his prime — Jimmy Butler. At the media day press briefing Monday, Heat coach Erik Spoelstra said that it “feels like a new team.”

Erik Spoelstra on new season: "We're energized about a group of men in the locker room that we think can bring out something special from each other."

If that has your head scratching, you’re not off-base. After all, Miami’s two noteworthy newcomers are Butler and Tyler Herro, the player Miami selected with their 2019 first-round pick.