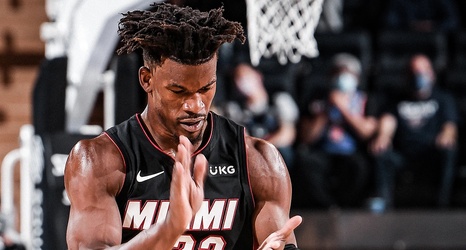 Finally back in the win column.

Thanks to a great second half, the HEAT snapped a six-game losing streak and defeated the Knicks 98-88 Monday night at Madison Square Garden.

And naturally, Jimmy Butler and Bam Adebayo were a big reason why.

Let’s get right into their performances, shall we?

After Miami had a rather pedestrian first half, Butler put the pedal to the metal in the third to turn things around.

Seriously, he dropped 15 points in the period to help the HEAT seize control.

For a perfect example of just how much he was cookin’, take a look at this awesome drive and left-handed scoop over Julius Randle late in the quarter:

Oh yeah, he also put the finishing touches on the game with this alley-oop jam courtesy of Andre Iguodala’s elite hands and Tyler Herro’s pinpoint lob:

Watch out for Sleeve Jimmy.