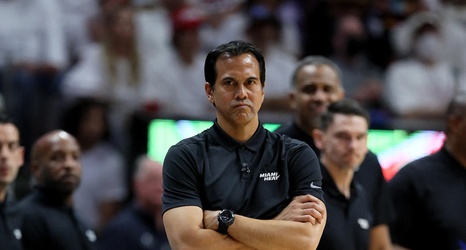 If you paid attention, you might’ve noticed that the Miami Heat were one of the more inactive organizations, at least amongst the top contenders, leaguewide this offseason — despite being heaved into nearly every trade rumor imaginable for Kevin Durant, Kyrie Irving and Donovan Mitchell.

They lost P.J. Tucker to the Philadelphia 76ers, but re-signed Victor Oladipo, Caleb Martin and Dewayne Dedmon all to team-friendly contracts plus drafted Nikola Jovic with the No. 27 pick and re-vamped their two-way contractual situation.

While the Heat — coming off an Eastern Conference-best 53-29 season, finishing one game (and perhaps one shot) from their second NBA Title berth in three seasons — not everyone believes they’re title contenders, which is more than fair.