What Each Heat Starter Needs To Do To Ensure A Threepeat 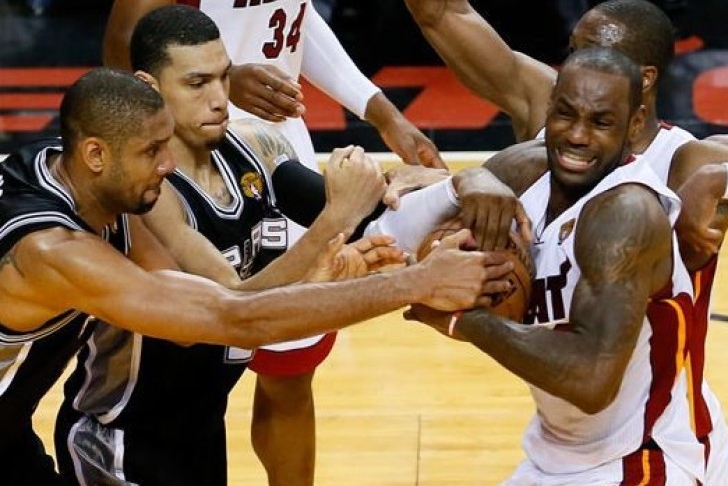 This year's NBA's Finals is already looking to be a good one.

The Miami Heat are the first team to reach four straight NBA finals since the 1980s, and for the first time since 1998, we have ourselves a rematch.

Miami beat out San Antonio for the championship in seven games last season, and this year San Antonio's Tim Duncan refuses to accept failure. "We've got four more to win," Duncan said after dispatching Oklahoma City in the Western Conference Finals - "We'll do it this time."

The Heat had a rough first half of the season, but have stepped up since the playoffs started. Like any good athlete would say, it's not how you start, it's how you finish.

Erik Spoelstra has been consistently rotating Miami's lineup, and the strategy has worked out well so far. With the starters fresh heading into the finals, let's take a look at what each of them needs to do in order to ensure a threepeat:

LeBron James: There isn't much the four-time MVP can do to improve his brilliant game. Fans have already watched James improve his three-point stroke, get better about his shot selection and increase his defensive intensity.

This is the finals, though - James must stay consistent, be more successful at the line and continue to play smart defense if he wants to win the title and earn his third championship ring. He also needs to stay strong on defense and negate rising star Kawhi Leonard.

Dwyane Wade: Talk of Wade's downfall has subsided thanks to his impressive performances in this season's playoffs. Many of the 28 games Wade missed in the regular season were meant to ensure he'd be ready for the postseason. Now, D-Wade is healthy and on top of his game, and he looks like an elite player again.

For Miami to take the Spurs down once again, he'll need to continue to improve his shooting percentage from the field and keep up his high percentage from the line. Wade looks a lot better than he did in last year's Finals, and if he can stay confident, we should see great play out of the future Hall of Fame shooting guard.

Chris Bosh: We've seen Bosh struggle, but we've also seen him play like the best player of Miami's Big 3. Eric Spoelstra has often said Bosh is the most important player on the team, and that might not be much of an overstatement.

Bosh holds the defense together by covering a lot of ground and closing driving and passing lanes. He will not be able to slack off during the finals - he needs to rebound, rebound, and then rebound some more. When he's in the zone, the team needs to get him the ball - when his shooting is on point, the rest of his game falls into place, and we see the best of Chris Bosh.

Mario Chalmers: As a significant player for Miami, Chalmers needs to start believing he's crucial to the team's success. As the Heat's starting point guard, Chalmers is capable of creating his own shots and moving the ball around.

The key for Chalmers will be making open shots, avoiding errors and helping the Big 3 find their rhythm. When he gets fired up, Chalmers can make threes all day - the Heat need to see that side of him against the Spurs if a threepeat is going to happen.

Rashard Lewis: Lewis recently took Udonis Haslem's spot in the starting lineup, another case of Miami rotating players. Chris Anderson will be back and Shane Battier is healthy, which means Miami has multiple options for the fifth spot in the lineup.

Lewis started only six games during the regular season, but has had a successful NBA career. He needs to make the most of his experience, pick up any slack on defense and help spread the ball. Whoever Miami decides to play in this spot must make their shots and negate whoever the Spurs throw at them on defense.

There is no room for error against San Antonio. The Spurs have more playoff experience than any other NBA team, and their coaching staff punishes teams who make even the smallest mistakes.

There's no doubt that this year, the road to the championship will be tougher than it was a year ago. The Spurs are hungry for redemption, but Miami is looking better than they ever have.

Will the Heat threepeat?