Five Reasons The Heat's Big Three Are Staying Together 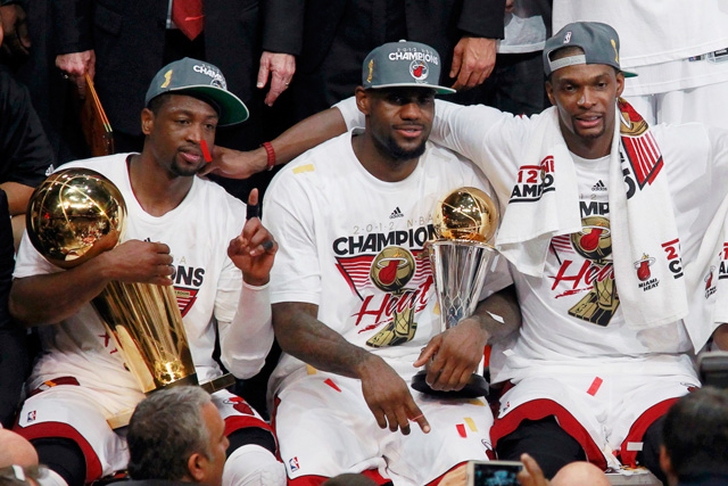 After losing the championship to the San Antonio Spurs, the future of the Miami Heat became much harder to predict. Different rumors have circulated about what the big three will ultimately decide to do this summer, and things are still murky.

Miami has gone to four straight NBA Finals, resulting in two championship rings. Now, LeBron James, Dwyane Wade and Chris Bosh have opted out of their contracts and left fans wondering what will happen next. It looks as though the three players don't intend to leave Miami...but not everyone is convinced. James has reportedly requested a short-term contract with a maximum salary, but Wade and Bosh could potentially take major pay cuts in order to leave room to build up the team.

Miami is trying to be as strategic as possible when deciding what free agents to go after to improve the team while keeping the big three intact. They have contacted former Raptors point guard Kyle Lowry, but have yet to set up any meetings.

Some say if James wants to win more titles, he needs to find another team to play for. Miami has taken the big three to four consecutive NBA Finals, though, and it's hard to argue that a move somewhere else (especially to the loaded Western Conference) would give them a better shot.

"How can we keep the guys together?" team owner Pat Riley said. "We're prepared. We've got the main thing all written up. Whatever it takes to keep them together, we're ready for. Let's stay here and try to keep this thing going."

Although Miami looked tired against the Spurs, they have the talent and support to make it all the way for seasons to come.

Here are five reasons the Heat's big three will ultimately stay together:

1. They've grown together. The team had some adjusting to do when James first signed on with Miami, but now they've figured things out. They continually improve at spreading the ball around the court, and when one member of the big three has a bad game, another is there to pick up the slack...most of the time.

2. They have the opportunity to play basketball like this:

3. They've proven that they can win together. Despite falling to San Antonio, this team won back-to-back championships together, and have gone to the last four NBA Finals. They've proven again and again that they can play on the league's biggest stage...and none of the other teams courting LeBron can say they've been able to do that recently.

Separating now would mean getting acclimated to a different style, and would make it harder for each player to get back to the NBA Finals. Even if they find a great team, things don't always gel right away - remember the 2011 Finals? This year, the Heat were mentally and physically drained, but they have the skills and the determination to fix mistakes and return to the top.

4. They feed off of each other. Sometimes, you see James struggling, and Bosh or Wade will step in to take over the game, which works to their advantage. The best moments come when all three are in the zone, and in those games the Heat can overpower every other team out there. Fans have seen the big three dominate, and although they were too drained to finish it off this season, there is still a lot left in the tank for this trio.

5. They wouldn't be as fun to watch if they didn't stay together. Not only have

James, Wade and Bosh built a great friendship together but they put on one of the greatest shows you can see at a basketball game. It wouldn't be the same game without the big three knocking down shots and taking over together in Miami. They compliment each others' skills, and balance out the team well. If Miami's front office can find some capable bench players to lend a hand, this team will be right back to where they were in 2012 and 2013.

Heat fans and players may be discouraged by their recent performance, but there is no denying how good they are.Individually, they can stand on their own and do well, but together, they can win.