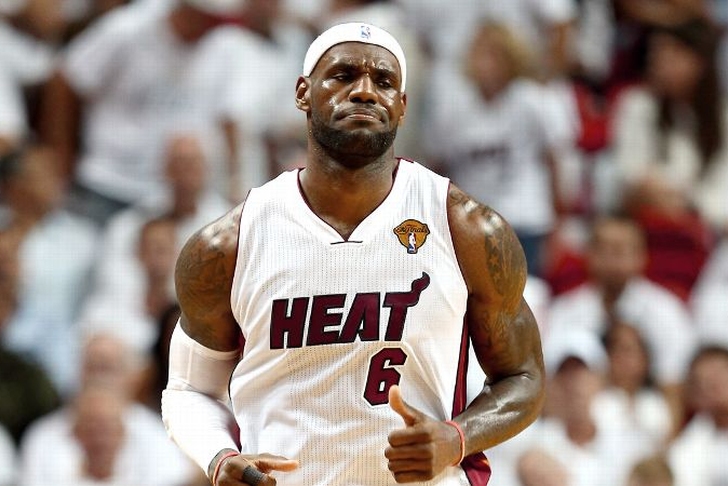 Miss any of Sunday's Game 5? Be sure to catch up with our first half recap!

Neither the Miami Heat (38.2%) nor the San Antonio Spurs (39.5%) shot the lights out in the first half, with the game settling into a shootout of miss after miss during stretches of the first 24 minutes. However, San Antonio turned the ball over just three times, compared to seven miscues for Miami - locking down on D with a 25-11 advantage in the second quarter. Spurs up 47-40 at the end of the half.

24 minutes away from a title? We'll find out.

The teams trade lost possessions for the first minute, before the Heat settle the ball down in the half court. Bosh tries a contested layup after passing up a contested triple, but misses down low.

Manu Ginobli misses a triple for the Spurs going back, but Ray Allen also misses on the Heat's return down the court.

Ginobli, however, gives it right back by throwing the ball away early in the shot clock. Heat possession. Bosh misses a triple with Tim Duncan right in his face, as neither team has scored in the third with the clock approaching 9:00.

The teams again trade zeroes, but Ginobli picks up a shooting foul on Chris Andersen - giving the Spurs the first two points of the entire quarter with 8:52 left. 49-40, as San Antonio has their largest lead of the night.

Ray Allen tosses it straight to the Spurs' Kawhi Leonard on Miami's next touch, as Leonard comes back and attacks - drawing a shooting foul. One freebie out of two and it's 50-40 Spurs. Heat timeout on the rebound. 8:14 left in the third.

San Antonio's ten-point advantage comes without a single point from Tony Parker (0-for-8 from the floor).

Returning from commercial, Chris Bosh and Kawhi Leonard trade tough buckets down low, to make it 52-42.

Dwyane Wade misses a short floater in the paint on the Heat's next play, eventually leading to Chris Andersen picking up his fifth foul, hacking Tim Duncan in the act of shooting on San Antonio's return down the floor. Two charity shots hit net, as it's 54-42 Spurs with 7:01 left.

Patty Mills draws his second charge of the game on the Heat's next possession, leading to both Heat coach Erik Spoelstra and the announcers deeming it a horrible foul call.

That doesn't matter to Mills, however, who finishes the sequence with a picturesque reverse layup coming back. Timeout Heat, as the game (and the championship) seems on the edge of slipping away. 56-42 Spurs with 6:35 left.

Dwyane Wade is the victim of a violent rejection by Tiago Splitter. The crowd subsequently ignites on the Spurs' next two touches, as Patty Mills sandwiches a Chris Bosh layup with two clutch triples. 62-44.

The Spurs aren't done yet, however. The camera starts shaking after a LeBron James miss leads to a Manu Ginobli trey. Timeout Heat, as the Spurs lead 65-44.

Spurs' bench outscoring Miami's 35-2 at this point as San Antonio is off to a 18-4 start to the frame.

The Heat get four easy points back though on a LeBron James jumper and a Mario Chalmers layup. Spurs coach Gregg Popovich irately calls timeout. 65-48 Spurs with 4:07 left in the third.

San Antonio slows it down on their next look, cycling the ball around the perimeter. It works, as Patty Mills finds himself wide open at the top of the arc. A "bang!" triple makes it 68-48 Spurs. That would be Mills' fourth three of the game. 14 points in ten minutes.

Chris Bosh is hacked on the Heat's next touch, dropping in one of two at the line. That is immediately answered by a Kawhi Leonard 20-footer (off a Patty Mills dime). 70-49.

Michael Beasley (who checked in for Dwyane Wade at the 5:01 mark) travels, but the Spurs can't capitalize. The Heat shave the lead to nineteen on a Chris Bosh driving layup with 2:30 left.

A Shane Battier steal leading to Kawhi Leonard's fourth foul - bumping Mario Chalmers in the act of shooting. Chalmers hits a pair and it's 70-53.

Patty Mills? Patty Mills. He hits another top of the arc three as he is left wide open. Lead to 20 with 1:30 left.

That lead becomes 19, as Tim Duncan gets one down low before LeBron James hits a rhythm three. 75-56 Spurs.

The teams each miss an opportunity, before Tony Parker gets his first two points of the game on a mid-range look. 77-56.

LeBron James aggressively attacks the rim on the return, drawing a shooting foul with 1.5 seconds left. He hits both freebies.

The Spurs just dribble out the quarter. Spurs up 77-58 at the end of three.