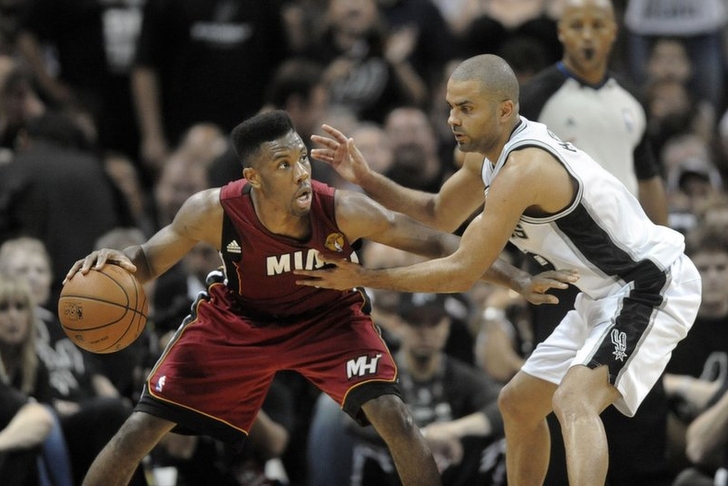 The Miami Heat opened up Game 2 with a turnover, very much like the story for both teams in Game 1, as LeBron James coughed it up leading to a Danny Green 18-foot jumper. After a Miami free throw, the San Antonio Spurs proceeded to keep their foot on the gas pedal, feeding it into Tim Duncan for a pretty and-one to make it 5-1.

For the next two minutes, the action was back, forth, back, and then forth again- keyed by a Marco Belinelli triple for the Spurs which was quickly answered by a Chris Bosh trey from the corner.

After the teams traded baskets down low, Tim Duncan just absolutely destroyed the rim with a vintage flush which will be played over and over if the Spurs win this series. The Heat's Rashard Lewis cut the momentum right there, however, going to his own throwback routine with a dagger three at the top of the arc. 14-11 Spurs with 6:37 to go.

On the Spurs' next possession, Kawhi Leonard hit one of two from the line after getting hacked. The Heat's Mario Chalmers pushed the pace right after that, showing aggressiveness to the rim that was perhaps missing from Game 1 arsenal with a pretty floater between two defenders. Timeout the floor, with the Spurs leading 15-13 with 6:35 left in the first.

Coming back from the break, each team trades a couple of lost possessions, including LeBron James missing his third straight shot to start the contest. LeBron, as if on cue, attacked on a pass from the right of the arc and dropped down a highlight reel dunk for his first bucket.

After James tied the game at 15, it officially became a Tony Parker extravaganza on the Spurs' next two touches. Parker cut into the lane on the first one, dropping in an effortless layup to push the lead back to two. The Heat failed to convert on the other end, leading to a Parker rainbow triple from the sidelines. 20-15 Spurs, as Erik Spoelstra called a full timeout to stem the tide.

A LeBron James turnover opened the action in the return from commercial, quickly leading to a Kawhi Leonard jumper. Bosh got the two back on the other end with a solid drive to the hoop, but then Manu Ginobli reminded everybody of his stellar Game 1 with an acrobatic layup to stretch the Spurs' lead to seven, 24-17.

That became nine after the Heat missed an easy one down low, and Duncan tipped one in on the other end. Ray Allen cut the lead back to seven with about a minute left before the teams traded missed opportunities with everything from a travel to a turnover.

With the score 26-19 and 48 seconds left, the Heat entered their half court offense to try and solve the riddle of the Spurs defense. They couldn't, as Bosh missed a 16-footer right as the shot clock expired.

After grabbing the board, the Spurs turned it over for the fifth time with 4.6 seconds left. They were quickly given the ball right back on a rough pass for Dwyane Wade on the inbound.

However, they couldn't capitalize on a Tiago Splitter look under the rim, ending the first quarter was the Spurs on top, 26-19.