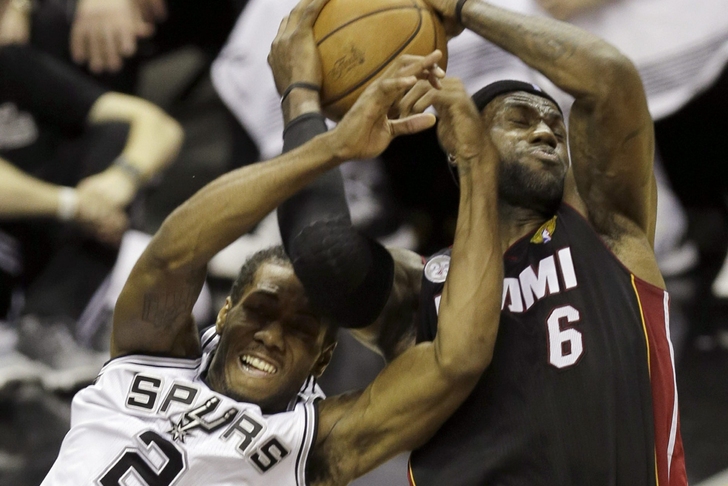 The Miami Heat came out on fire right off the bat, with Chris Bosh dropping his first two shots (including a corner three) and Lebron James picking up an easy basket on a turnover to lead the Heat to a 7-2 lead two minutes in.

The San Antonio Spurs threw their own counter-punch right after, scoring eight of the next ten including a tough hook shot by Tim Duncan just outside of the lane - taking the lead 10-9, with 7:18 remaining.

Then, Dwayne Wade just happened...throwing together a beautiful spin fake to clear the lane before dropping in an easy four-footer to give the Heat a one-point lead heading into the first TV timeout. To be honest, the Spurs could have been down by a few more at this point after turning the ball over four times in the first five minutes.

Manu Ginobli came out of the break completely ready for the weight of the moment, with Ginobli feeding Duncan for an easy two in the paint before launching two nothing-but-net threes to give the Spurs an 18-13 lead with 5:12 left. The Heat's Erik Spoelstra could do nothing but take timeout.

The Heat, in true heavyweight fight fashion, answered right back with six unanswered after the break - taking advantage of a narrow miss on a three by Kawhi Leonard and a couple of rough paint possessions for the Spurs to take an 18-17 lead with 3:24 on the clock.

He swished another pretty three to give the Spurs back the advantage. At this point, Manu was 3-of-3 from downtown, scoring nine points in just four minutes off the bench.

In what may prove to be a pivotal moment soon after, Kawhi Leonard picked up his second foul on a 50-50 call on LeBron James, sending him to the bench for the final 2 1/2 minutes of the quarter.

This didn't phase Ginobli, who threw a nice dart to Tiago Splitter down low for a quick two and then found Patty Mills for a corner three - extending the San Antonio lead to six at 26-20.

A Boris Diaw gave the Spurs the last possession, but Danny Green missed a three at the buzzer making it Spurs 26, Heat 20 at the end of one.