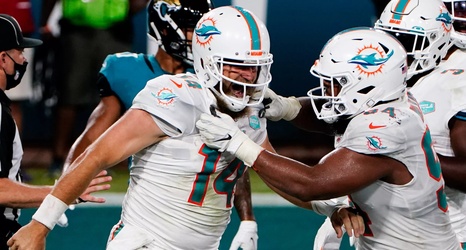 The Dolphins are coming off their first victory of the season thanks in large part to their veteran quarterback. We saw Thursday night how much these players love having Fitzpatrick at quarterback and playing with him. Fitzpatrick was interviewed after the game and said he’s just out there having fun playing with his friends. Not sure how much longer we’ll see him as the starting quarterback, but he always makes it interesting.

Ryan Fitzpatrick having fun in Dolphins' win: 'I feel like the luckiest guy in the world'
Ryan Fitzpatrick may be 37, but the Dolphins quarterback still has game left and showed it Thursday night with a blistering performance as Miami jolted Jacksonville 31-13.