Miami Dolphins value of running back position is different than fans 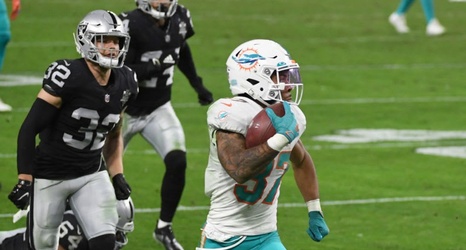 LAS VEGAS, NEVADA - DECEMBER 26: Running back Myles Gaskin #37 of the Miami Dolphins scores a touchdown on a 59-yard pass play ahead of safety Dallin Leavitt #32 of the Las Vegas Raiders in the second half of their game at Allegiant Stadium on December 26, 2020 in Las Vegas, Nevada. The Dolphins defeated the Raiders 26-25. (Photo by Ethan Miller/Getty Images)

The Miami Dolphins passed on Najee Harris and watched Javonte Williams slide out a pick before them in round two but do they value runners as fans want?

It’s hard to say that Miami doesn’t put enough emphasis on their running backs and while we can say that in one breath, we also heard rumors on Thursday that the Dolphins desperately tried to trade back into round one ahead of Pittsburgh to draft Harris.