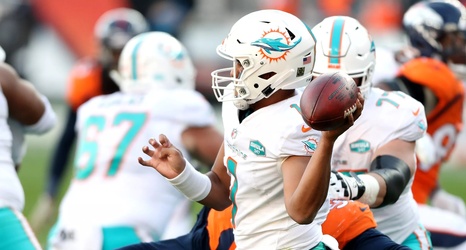 There is plenty of blame to go around after Sunday’s 20-13 loss to the Denver Broncos. And whether you want to point the finger at Chan Gailey’s offense or Josh Boyer’s defense, there’s an argument to be made for both sides of the football.

I believe the Dolphins defense did what we’ve come to expect them to do this season. Which is continue their ‘bend don’t break’ mentality of football. And yes, creating turnovers in 16 straight games is a nice stat, but you would’ve hoped holding the Broncos to 20 points on offense would mean Miami heads back to South Florida 7-3—but that’s just not how this day ended.