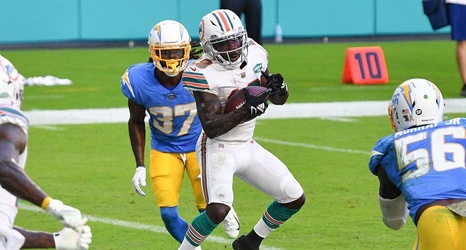 MIAMI GARDENS (AP) — The battle of young quarterbacks was decided by special teams and the Miami Dolphins’ blitz-happy defense.

Tua Tagovailoa had help from a less-heralded rookie while Justin Herbert struggled against a relentless pass rush, and the surprising Dolphins earned their fifth consecutive victory by beating the Los Angeles Chargers 29-21 Sunday.

The Chargers could never catch up after they were hurt by two mistakes in the kicking game that allowed Miami to take a 14-0 lead.

The Dolphins’ Salvon Ahmed, making his first career start, ran for 85 yards on 21 carries and scored a 1-yard touchdown on his team’s first play.