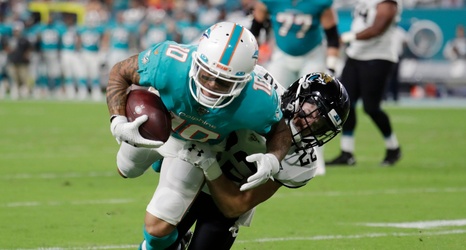 MIAMI (CBSMiami/AP) – Josh Rosen came off the bench late in the third quarter and engineered a 99-yard touchdown drive, and the Miami Dolphins beat the Jacksonville Jaguars 22-7 in a preseason game on Thursday night.

Rosen, who is battling Ryan Fitzpatrick for the starting quarterback job for Miami (2-1), was 5-for-7 for 59 yards and a touchdown and ran four times for 23 yards.

Nick Foles, making his first appearance of the preseason for the Jaguars (0-3), played the first quarter and went 6-for-10 for 48 yards with one touchdown and one interception.

Rookie defensive end Josh Allen, the Jaguars’ first-round draft pick, had four tackles, including two for losses in the first half, and two quarterback hits.