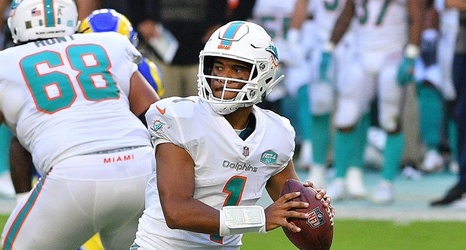 MIAMI GARDENS, Fla. (AP) — Tua Tagovailoa threw his first career touchdown pass and then let his teammates take over with a succession of big plays, and the Miami Dolphins stamped themselves as playoff contenders Sunday by earning their third consecutive win, 28-17 against the Los Angeles Rams.

The Dolphins struck for scores 75 seconds apart on Andrew Van Ginkel’s 78-yard fumble return and Jakeem Grant’s team-record 88-yard punt return. They came up with four takeaways in the first half and at halftime led 28-10 despite being outgained 224-54.