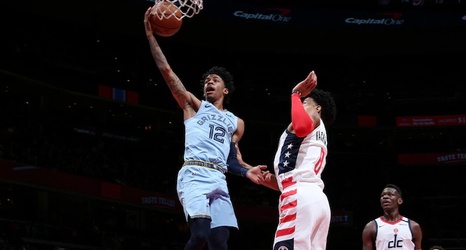 The Memphis Grizzlies defeated the Washington Wizards 106-99 inside Capital One Arena on Sunday night to end a three-game road trip.

Memphis was led by Ja Morant, who posted the first triple-double of his career with 27 points, 10 rebounds and 10 assists. The only players younger than Morant in NBA History to record a 25-point triple-double are Luka Doncic, LeBron James and Shareef Abdur-Rahim.

The Grizzlies struggled to get anything going in the opening quarter, shooting 31.8 percent from the floor while going 0-of-7 from behind the arc. The Wizards scored 10 of the final 12 points in the quarter after Jerome Robinson connected on a three-pointer as time expired to take a 30-18 lead heading into the second quarter.