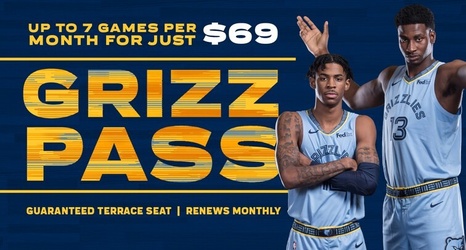 The Memphis Grizzlies have launched ‘Grizz Pass,’ an all-new ticket subscription plan that guarantees seats up to seven games per month.

For just $69, fans can access up to seven select games per month and are guaranteed one Terrace Level seat per game. There are four monthly plans available: December, January-February, February-March and April. January-February will include select January games and the first two games in February. February-March will include the February 28 game vs. Sacramento Kings and March games.

Grizz Pass subscribers will receive a text message seven hours prior to tip-off with a seat assignment.