Terps in the NFL: Stefon Diggs and J.C. Jackson are both leading the league 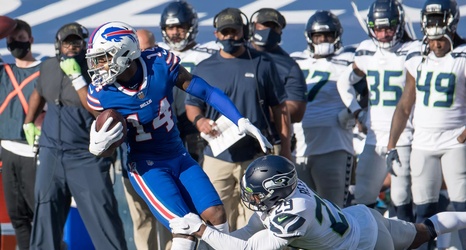 Two former Maryland football players became leaders of the entire NFL in their respective categories with their play in Week 8.

Buffalo Bills wide receiver Stefon Diggs is at the top of the league in receptions (63), targets (91) and receiving yards (813), while New England Patriots cornerback J.C. Jackson sits at No. 1 in interceptions with five on the season.

Diggs caught nine passes for 118 yards on Sunday against Seattle, which were his second-most catches and receiving yards in a game this season. Buffalo defeated Seattle, 44-34, in one of its toughest tests of the season, improving to 7-2, which is good for first place in the AFC East and third place in the entire AFC.