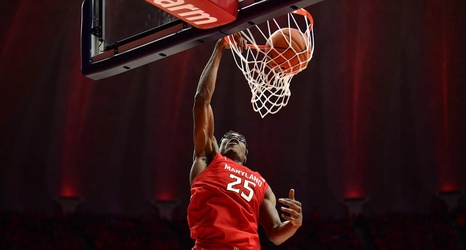 CHAMPAIGN, Ill. — With under 17 minutes remaining, Anthony Cowan Jr. dribbled the ball at the top of the arc, surveying his options as he tried to give No. 9 Maryland men’s basketball some life against No. 20 Illinois. The senior guard threw a lob pass down low to Jalen Smith, who scored a layup with one outstretched hand to tie the game at 44-44.

On the following possession, Donta Scott and Darryl Morsell double-teamed Giorgi Bezhanishvili, forcing the big man to lose control of the ball. The Terps appeared to slow things down, handing back the ball to Cowan, but the senior guard rocketed a pass across the full length of the court to Smith, who threw down a slam with ease to give Maryland a two-point lead.