No. 9 Maryland men’s basketball holds on for 72-70 win over Nebraska 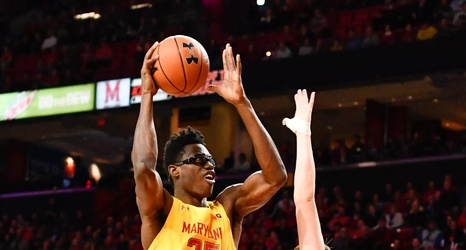 With under a minute to play and No. 9 Maryland men’s basketball in a one-point game with Nebraska, senior guard Anthony Cowan Jr. was sent to the line for a one-and-one opportunity to extend his team’s lead to three.

But Cowan missed the first, allowing Cornhusker guard Cam Mack to take the ball coast-to-coast and attempt to make a game-winning layup and end the Terps’ undefeated home record.

Instead of finishing the play, the Nebraska guard was met by Jalen Smith, who came over and swatted his shot away with his left hand to secure the Terps’ eventual 72-70 victory Tuesday night.