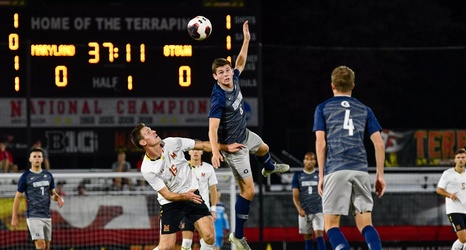 Despite being heavily out-shot for more than half of the match, No. 25 Maryland men’s soccer still found itself level with the No. 12 team in the country after 60 minutes of play.

But the Terp defense finally broke in the 64th minute, as Georgetown’s Derek Dodson saw his third shot of the evening find the back of the net to put the Hoyas up 1-0, a result that would hold for the final 30 minutes of play to handing Maryland its second home loss of the season.

Dodson’s goal came at the end of a long counter-attack, led by junior midfielder Paul Rothrock and senior forward Achara, who carried the ball all the way through Maryland’s defensive zone and into the box.