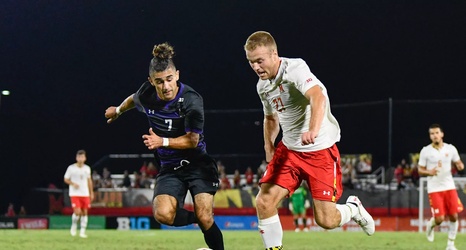 With consecutive losses to Penn State and Michigan, No. 23 Maryland men’s soccer suddenly finds itself in a much less favorable position now then they did two weeks ago.

Once the No. 17 team in the nation and vying for the Big Ten regular season crown, the Terps’ losses dropped them six spots in the latest United Soccer Coaches poll and into the sixth spot in the Big Ten, forcing them to play on the road in the first game of the Big Ten tournament against fifth-seeded Northwestern (8-7-2, 3-3-2 Big Ten).

Maryland (9-6-2, 3-3-2) still should be in a strong enough position to earn an at-large bid to the NCAA tournament, sitting within the Top-25 in the Division I rankings, as well as the NCAA’s RPI rankings with wins over four ranked opponents this season.