No. 15 Maryland men’s basketball rallies behind Anthony Cowan Jr. and Jalen Smith in 82-72 win over No. 18 Iowa 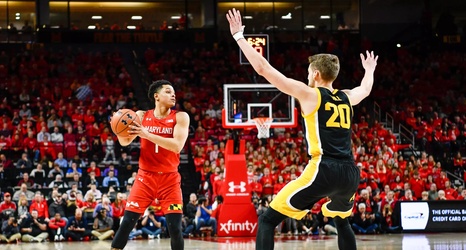 As his teammates fought for the defensive rebound, Anthony Cowan Jr. sprinted to the other end of the court, eager to create some separation for No. 15 Maryland men’s basketball, who had been locked in a back-and-forth battle with No. 18 Iowa all night.

After sinking a layup with ease to give the Terps a three-point lead, the senior guard brought pressure on the Hawkeyes’ inbounds play, forcing guard Joe Toussaint to tip the ball out of bounds. Less than a minute later, Jalen Smith grabbed a miss from Darryl Morsell inside and jumped over his defender to throw down a two-handed jam to extend Maryland lead to five.